Spain, officially Kingdom of Spain, is a country in southwestern Europe, bordering the North Atlantic Ocean and the Mediterranean Sea between Portugal and France. The country covers a total of 504,782 square kilometers (including 5240 sq kms of water) and has 4964 kilometers of coastline. Spain is the highest European country after Switzerland and its highest point is the Pico de Teide in Tenerife on the Canary Islands at 3718m; on the mainland is the Mulhacén (3478m) in the Sierra Nevada in Andalucia. Spain occupies four-fifths of the Iberian Peninsula and is extremely diverse, ranging from the near-deserts of Almeria to the green countryside of the north and the white sandy beaches of the Mediterranean.

Spain consists of 17 administrative regions, 15 of which are on mainland Spain and five other places of sovereignty on and off the coast of Morocco. Madrid is Spain’s capital, each sovereign community has a capital (e.g. Catalonia has Barcelona as capital), and within each autonomous community there may be more than one province (e.g. Comunidad Valenciana consists of 3 provinces – Castellón, Valencia and Alicante) that also has a capital and which may be different to the community capital. The Country offers the tourist a great deal with a fabulous coastline however in recent years more and more people are spending holiday time, exploring beautiful and cultural Spain, away from the sea and sand. Spain has everything from flourishing, green forests and mountain ranges, through to endless scorched plains and long, pristine beaches. There are five big mountain ranges crossing the country, and about 50% of it is located at an elevated plain. The major rivers of Spain flow west and south to the Atlantic Ocean. The Duero (Douro), Tajo (Tagus), Miño, and Guadiana rivers start off in Spain and flow through Portugal to the Atlantic Ocean. The Guadalquivir River is the deepest and most traversable. The Ebro River flows into the Mediterranean Sea and partly it is navigable.

Spain festivals, the local culture, nightlife, and above all summer resorts and Beaches are very mesmerizing that attracts tourists across the globe. Most of all, the winter tourism is most famous because of mountainous features and it facilitate tourists ski resorts. Apart from these beautiful places, the infrastructure i.e. Spain rail and Spain road are highly developed and well connected.

The topographical characteristics also breed various climatic regimes throughout the country. Peninsular Spain experiences three climatic types: continental, maritime, and Mediterranean. In the northern part of the country, a maritime climate prevails from the Pyrenees to the northwest region, characterized by relatively mild winters, warm but not hot summers, and generally abundant rainfall spread out over the year. The Mediterranean climate prevails in the Andalusian Plain along the southern and eastern coasts up to the Pyrenees, on the seaward side of the mountain ranges that parallel the coast.

Most of the mainland Spain landscape is dominated by the Meseta Central which is a huge plateau in the centre of Spain, averaging around 500m above sea-level and covering around 40% of the Spanish mainland. The Meseta is guarded and crossed by a number of mountain ranges, such as:


The geography of Spain is also marked by its many coastal plains (such as the Andalusian Plain in Andalusia) and lowland river valleys (like the Ebro Basin). Overall, the regions of Spain can be subdivided into four main groups: the Meseta Central, other mountain systems, lowland areas and island. The island groups such as the Balearic Islands in the Mediterranean Sea eastward of Catalonia and Valencia and the Canary Islands located in the Atlantic Ocean off the northwest coast of Africa.

In the northern half of the Peninsula, Archaean rocks are exposed particularly along the great Pyrenean axis, the Sierra Morena, in Galicia, Estremadura, the Sierra Nevada, and Serrania de Ronda. The region has mica-schists, with talc-schists, granites, gneisses, amphibolites, and crystalline limestones. The oldest Palseozoic strata such as wackes, quartzites, slates, grey and diabases and shales referable to the Devonian system occur in a few scattered areas, the largest and most fossiliferous of these occurring in the Asturias in region of Andalusia, Estremadura, Castile, Salamanca, Leon and along the flanks of the Pyrenean and Cantabrian chain.

The Carboniferous rocks of Spain are classified into three groups, the upper layer consist of sandstones, conglomerates, shales, and coals. The middle layer consists of conglomerates and sandstones, and the lowest consisting of limestones with sandstones and shales. They lie in detached basins and continuously through the provinces of Leon, Palencia, and Santander, covering altogether an area of 6500 square kilometers.

in the north of the Peninsula along the Cantabrian chain and eastwards to the Mediterranean, The Triassic system is well developed and it is composed of red and variegated sandstones, dolomites, and ophitic rocks, and containing deposits of gypsum, aragonite, and rock-salt. The Cretaceous system is spread in four regions; Murcia, Valencia and along the southern slopes of the Pyrenees from Navarre to the Mediterranean.

Deposits of Tertiary age envelop rather more than a third of Spain and are divided according to their mode of origin in the sea or in fresh water. The marine Tertiary accumulations are especially noteworthy for containing an important metalliferous deposit that of the native silver of Herrerias; developed in the basin of the Ebro, and in a belt which extends from Valencia through Murcia and Andalusia to Cadiz. Tertiary accumulations are those of the great lakes which in Oligocene and Miocene time are found in the basins of the Ebro, Jucar, Guadalaviar, Guadalquivir, and Tagus. Quaternary deposits cover about a tenth of the area of the country. The largest tract of them is available in the south of the Cantabrian chain; lesser amounts in the Sierra de Guadarrama, and spreads out over the great plain from Madrid to Caceres. 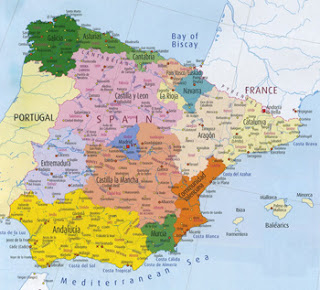